For 45-year-old Christian Bertelsen from Denmark, life on the water has been part of his existence since he was very young, but it was only 5 years ago that the family of our bought their first sailing yacht, a 34-feetBeneteau on which they sailed home from Holland. Since then, the size of the yacht has increased twice and the current 50-feet Beneteau was purchased 3 years ago with the idea in mind that, one day, they would cast off and sail far across the oceans.

Both Christian and his wife are self-employed and the hours they were working were increasing rapidly, so when they took the decision to rip a year out of the calendar and sail out into the world many, many things had to fall into place first. However, in March everything fell into place and the exhaustive preparations got underway in earnest.

It was important to Christian and his family that they could have a reliable energy source on board that could provide the necessary power for the refrigerator, freezer and other equipment. The obvious choice was solar cells, so they contacted Solarship.pro, part of Green Energy/MIPV.pro.

It was technicians from www.solarship.pro who were responsible for the calculations for the solar cell system.  A special Targa bar has been built on which the solar cells are mounted, the upward-facing installation ensures optimal utilisation of the sun. The yacht is equipped with 8 x 55 Wp solar cell panels as well as a 30 MPPT charge controller.

As to the question of what was required to take a year out to realise the dream of sailing round the world, the response comes quickly and clearly: “We have not been the best version of parents during this period,” declares Christian. This is not an opportunity we were given, it is an opportunity we created, as a family and through sheer hard work. It requires a great deal of effort and there have been countless long days of work, but we believe it will pay off – it is an experience that will stay with the children and ourselves for the rest of our lives.

The family will not be sailing alone, a variety of guests will join them alternately on board. As a bonus, the guest who is joining them from the start is also a schoolteacher, and since the children will have to be home-schooled, this is great. There has been fantastic cooperation with the children’s school whereby it has been agreed that a video conference will be held with the children of 10 and 12 and their class, during which they will tell them about their trip, their experiences, which will also help them stay in touch with their classmates.

For Jeanne, a hairdresser, the trip has meant she has had to bid farewell to her salon, Christian has wound up his business and the house has been rented out, so the consequences of this decision will extend far into the future.

But, as Christian says, “Who knows, perhaps will take a year more… time will tell”.

The yacht sets sail from Denmark on the 1st of August at 11.00. The itinerary has been more or less set, the first stretch goes through the Kiel Canal to Helgoland, Holland, Belgium and Normandy – as a former soldier Christian has a wish to see the D-Day coast, the Channel Islands, the French town of Brest will be the preparation point for the trip down along the Spanish and Portuguese coasts, and from there the trip will continue to the Canary Islands and Morocco. The trip will then take them across the Atlantic, to Granada and they will do some island hopping to Florida, Bermuda and the Azores.

We at Solarship.pro, are proud to have a hand in the great sailing adventure around the world and look forward to following the family and their experiences. There will be updates from the family’s trip. You can also follow the family’s blog on Facebook at: Sailing Lady Godiva

Solarship.pro is increasingly being asked to ensure the power supply on seagoing vessels around the world, this includes large sailing boats, yachts and even electric ferries. Solutions for container ships are also available. 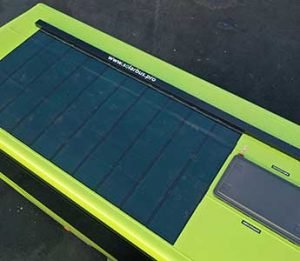 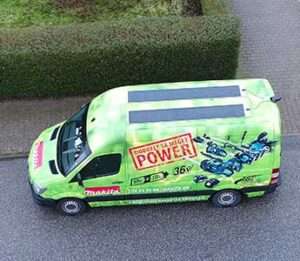 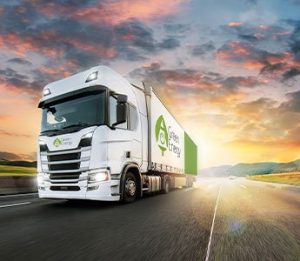 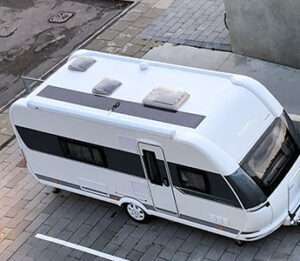 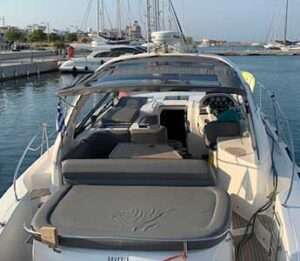